A new band with three very experienced musicians will top the bill at Irvine Folk Club on Wednesday 30th October. Drever, McGuire & Young is the band. 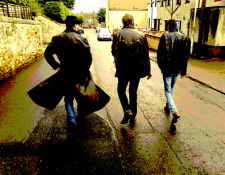 Ivan Drever, Frank McGuire and Rich Young are the musicians who met at a Folk Club in early 2012 where they first played together ….and a new band was created.

Irvine audiences are well acquainted with Ivan Drever and Frank McGuire, both having played at the Club and at Marymass Folk Festival over the years.  Rich Young will be a new face.  English born Rich lives in Scotland and has a very varied musical background. On guitar and keyboards, he has played, performed and recorded with the likes of Eurythmics Dave Stewart and Dire Straits’ David Knopfler. He also writes music for radio and TV shows and produces and records music.

Orkney isles man Ivan Drever fronted the acclaimed folk rock band Wolfstone and then went on to a variety of musical collaborations from all of which he has 28 albums to his name! Can he really be old enough to have done all that !

Percussionist and Whistle player ‘of note’ Frankie McGuire is just at home whether playing at a small session in a Bar or at a Concert in a large hall.  Most usually heard in Irvine as leading Lyra Celtica, Frank like Ivan and Rich brings a wealth of musical experience to the band.

Drever, McGuire & Young play vintage folk plus blues and soul. The band has just released their debut album and it promises to be another good night on Wednesday 30th October at Irvine Folk Club.  The Club meets in Vineburgh Community Centre in Quarry Road and starts at 8pm.  It’s also BYOB.

Elsewhere, the Celtic Connections programme for 2014 was launched last week.  There will be 2,100 artists – yes that’s two thousand one hundred – appearing in 20 venues at 300 events from 16th January to 2nd February.