Brian Peters is ‘a singer, guitarist and melodeon player of rare ability’ according to the USA journal Dirty Linen and they’re always on the button with their assessments. Good news therefore that Brian is the guest at Irvine Folk Club on Wednesday 20th March. 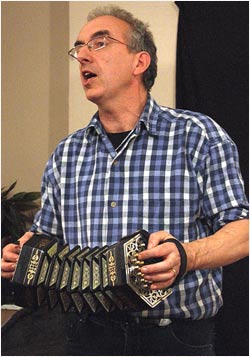 One of England’s leading exponents of the Anglo Concertina, Brian is also a skilled player of the Button Accordion and Guitar. He is also has a fine singer.  Don’t think of him as a diehard traditionalist.  Modern songs of struggle or comedy feature in his live performances.  His book Rattle and Roll sees Brian unearthing tunes from centuries-old manuscripts and composing new tunes in trad style.  He also makes frequent forays into blues, ragtime and rock’n roll on his Squeezebox.  This all makes for a startling variety in the repertoire of Brian Peters.

He is in great demand as a teacher of Concertina, Melodeon, Guitar and Ballad Singing in the UK and the USA.  In addition, Brian does a lot of session work and as an Accordion player can be heard regularly on the TV cartoon Spongebob Squarepants.  Check it out!

Brian has eight solo CD’s to his name plus two recorded as part of a duo. He has, unsurprisingly, a busy touring schedule – the second half of April will see him in Eastern USA.

The Irvine Club is very fortunate to welcome back this talented all-rounder.  Hear Brian Peters at Irvine Folk Club on Wednesday 20th March at 8pm in Vineburgh Community Centre in Quarry Road. You’ll not regret making the journey.