It was two musicians Eivind Hodne from Stavangerand Stephen Quigg from Saltcoats who won the World Whammy-Diddling and World Chuckie-Chucking respectively on the final day of the 45th Marymass Folk Festival. 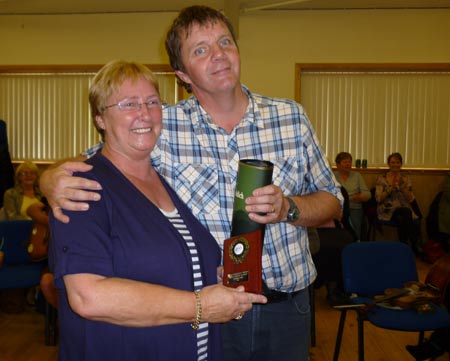 The World Championships came at the end of what had been an excellent  Marymass Folk Festival.  Packed sessions at The Ship with musicians and punters in nearly every corner, a tremendous final concert on Marymass Saturday in the Volunteer Rooms held together in fine style by Bill Nolan and many  other highlights made it a memorable 45th Marymass Folk Festival.

But, to the World Championships. Double Bass player with The Stavanger Hrabour Band Eivind won the Whammy-Diddling title in a keenly fought, tactical battle.  Mustering all his puff, not easy the day after Marymass Saturday, Eivind managed to land the championship with a whole one point.  Speaking afterwards, a delighted  and somewhat bemused Eivind said – ‘It is overwhelming.  I am going to take this sport to Norway.  We need to spread this sport throughout the world.’

Shortly afterwards, Stephen Quigg who had been playing throughout the five day festival romped away with the Chuckie-Chucking championship.  For those who understand the scoring system of this event – and they are few – Stephen won with two sets plus a four. That meant he won!  ‘Winning the World Chuckie-Chucking Championship for the third time is a great pleasure’ said Stephen.  He added, ‘To be up there with Anna Gilmour – formerly of Dreghorn and now living in Dundee, the other three times champion.is quite something.’

The much-sought trophies and even more sought after bottles of Glenfiddich, were presented to Eivind and Stephen by Marymass Folk Festival’s Joyce Hodge.