It is with huge sadness that the unexpected death of Nick Keir is reported.  Nick died in hospital in Edinburgh on Sunday 2nd June as the result of an embolism.  He was 60 years old.  Edinburgh man Nick had been battling cancer for the last 14 months. 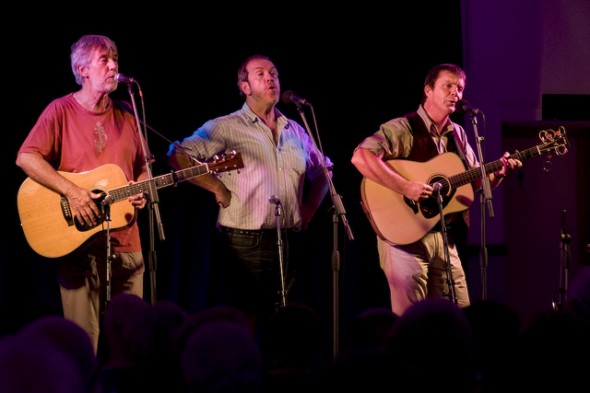 It was as a student at Stirling University that Nick formed the band Finn mac Cuill which went on to record two albums and tour Europe. He also wrote many songs for the 7.84 Theatre Group. He then went on to work at The National Library in Edinburgh and it was while there that Nick was invited to join The McCalmans in 1982.  Nick was ‘the middle one’ of The Macs and he remained with them until they hung up their instruments in 2010.

He wrote many fine songs and was a skilled instrumentalist. However, Nick was particularly  good when The Macs would ‘ham it up’  in songs like Goodnight Sweetheart, Wrecked Again and Don’t Sit on my Jimmy Shands.

He released a solo album recently, The Edge of the Night.  It has been attracting consistently good reviews one describing it as “an accomplished triumph in which the singer comes across as a man at peace with himself.”

Nick had been booked to play at Marymass this year.  He was delighted to have been asked and was looking forward to it.

Nick is survived by his Mum and a brother.