All the way from Winnipeg, Cara Luft is the Irvine Folk Club guest on Wednesday 13th June – one of only two Scottish dates on her UK tour. Cara’s tour coincides with the release of her third solo album Darlingford. 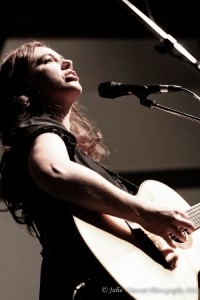 Born into a folk music family in Calgary, Alberta, Cara preferred to play with dulcimers and autoharps rather than toys and games.  Music being integral to her growing up, she entered a talent contest the prize for which was studio time. She won!  Cara cites her main musical influences as Buddy Holly and Led Zeppelin.

A solo performer for a few years now, Cara was a former founder member of The Wallin’ Jennys and played with them for 10 years. She is a singer, a songwriter and is described as a guitarist extraordinaire – indeed, she was invited to play at the prestigious Guitar Festival in theUK.  Critics have drawn comparisons with her vocal talent to June Tabor and Linda Thompson. Add these talents to her insightful and evocative song writing and it’s easy to see why Cara Luft has wowed audiences across North America andEurope.   She plays a mix of styles drawing from roots, folk, rock and country music. She also likes to laugh. What’s not to like!

Cara also teaches various workshops on songwriting, harmony singing, guitar technique and ensemble playing. She also loves doing House Concerts – something that is growing in popularity where she comes from.

Cara Luft’s UKagent is former Artisan member Jaycee Bedford and she knows a thing or two about singing.  Therefore, get along to Irvine Folk Club on Wednesday 13th June for 8pm in Vineburgh Community Centre to hear the talented and engaging Cara Luft.