The Marymass Saturday Evening Concert is always one of the highlights of the year and this year comes into the ‘not to be missed’ category. This post is a request for members and friends to help get the word out about Na Leanai, who will be headlining the Concert at The Volunteer Rooms in Irvine on Saturday 22nd August. Na Leanai may not be a name familiar with music fans in Ayrshire, but once they realise the group’s association with one of Ireland’s first families of folk music, The Sands Family, they will know that they are in for a treat. 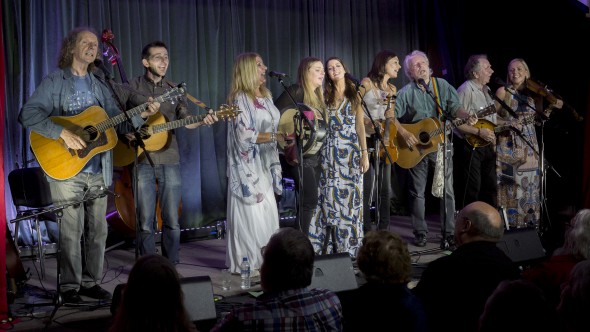 Photograph: Na Leanai and The Sands Family at Fiddler’s Green Festival. (It is the ‘youngsters’, Na Leanai, who will be at Marymass this year, an extended family concert is perhaps something we can hope for in the future.)

Na Leanai are the daughters and sons of various members of the Sands Family and sing the family songs, traditional songs, a few of their own, and play fiddle, whistle and guitar. They recently launched their first CD at the Fiddler’s Green Festival in a concert where The Sands Family and Na Leanai performed their own sets before coming together as a combined family group. It was one of those memorable moments that will live with people for years to come and promises much for their appearance at Marymass Folk Festival, 2015.

All of the Sands family share common traits including good humour, anecdotes and stories and above all great songs. Tommy Sands in particular is a songwriter with a reputation on a world stage, having performed and co-written songs with the legendary Pete Seeger, but brothers Colum and Ben also have that family gift of turning every day experiences into songs.

The name Na Leanai, means ‘children’, although in the case of the Sands it is better expressed as ‘the next generation’. And the next generation is very much in the minds of the organisers of the Marymass Folk Festival as they look forward to the festival’s 50th anniversary in 2017. Marymass Folk Festival was a springboard for many performers who went on to a career in music. Billy Connolly, Aly Bain, Alistair MacDonald, Gallagher & Lyle, The McCalmans, Johnny Silvo and many more, all look to Marymass with fondness and happy memories. For the Sands Family, who first came over from Ireland to play at the festival in the early 1970s, Marymass was important in their decision to become professional musicians. It opened the door to performances in Scotland and beyond for The Sands Family as a group, and also for individual members, particularly Tommy, Colum and Ben Sands who are regular visitors to clubs and concerts to this day.

Festival events run from Wednesday 19th through to Sunday 23rd August with a packed schedule of concerts, sessions and community events throughout the town. Arthur Johnstone & The Stars Band headline the concert on the Thursday evening with Celine Donoghue & Neil Sturgeon topping the bill on the Friday evening. Both of these concerts take place in Vineburgh Community Centre which is the home of the Irvine Folk Club throughout the year. 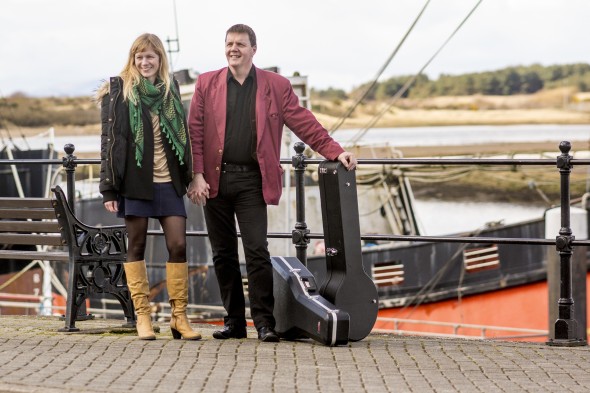 There is a particularly strong line up of resident performers who will be appearing throughout the week. The residents include fiddler Tom McConville from the North East of England, who returns after being a main guest in recent years, Sunjay Brayne, a young musician with quite incredible skills on guitar, The Stavanger Harbour Band who are regular visitors to Irvine from Norway, The Alistair McCulloch Trio and Stephen & Pernille Quigg. Ayrshire based Stephen Quigg is well known from his time with The McCalmans, one of Scotland’s top folk groups, and more recently with his wife and singing partner Pernille. A new name among the residents is Hector Gilchrist. Hector has made quite a name for himself in England over many years, and has released CDs on the prestigious Wildgoose label. Hector was involved in the early days of the folk music scene in Ayrshire, moving to the south of England from his home village of Coylton over forty years ago.

Tickets are available online via this website or from Joyce Hodge, 01294 551047. Some tickets will be available on the door, but early booking is advised.

(For anyone who wondered, Na Leanai is pronounced Na lah-nee.)