The general concensus is that 2011 was a Vintage Year for the Marymass Festival. Photos and a report will be added to the site over the coming weeks.

Vin Garbutt, a late addition to Marymass, headlined the Friday evening concert in the Volunteer Rooms and live up to his reputation as one of the funniest people you will ever meet. The new Marymass Folk Festival Fringe proved to be an excellent warm-up to the 44th Marymass Folk Festival with guests including John Carmichael & His Band; Dominic  Boyce  &  Ian; Haggerdash; Landermason; Lyra Celtica; Maw, Paw & The Wean; The Tattie Howkers Ceilidh Band; Thomas Turner and Michael Woods. The Folk Festival Fringe was made possible by an Awards For All grant and it means that folk musicians can be heard by people who otherwise might not have the opportunity.

Marymass Through the Lens – is a project recording this year’s Marymass Celebrations in photographs leading to a web based exhibition.  Several photographers took part and the photographs will be made available over the coming weeks and months.  If you took photographs at Marymass but were not part of the official project, is it not too late to get involved.  Your photographs can be selected for the exhibition and we can start planning early for next year’s festival.

To see what you missed, have a look at the programme – but start looking forward for the 45th Marymass in 2012!! 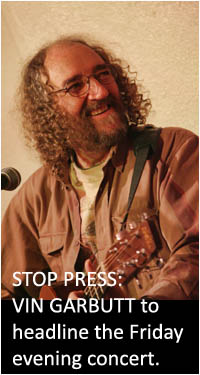 Nineteen scheduled events made up the 2011 Marymass Folk Festival. The Folk Festival Committee arranged a strong and varied line-up.  The Buskers from Dublin made their annual pilgrimage  to Marymass as did Johnny Silvo.  Johnny along with Stephen Quigg, Heather Heywood and Arthur Johnstone were all on stage for the Singers’ Concert on the Thursday night.

Vin Garbutt topped the bill on Friday night along with the residents. The Marymass Saturday Night concert featured all the resident artists who were all over Irvine throughout the Festival.  Taking part was the aforementioned Buskers and Johnny Silvo, the four-piece Drantan who are now firm Marymass favourites, Perthshire native Doris Rougvie, Lurach – an exciting four-piece acoustic band, Stephen Leeson – a young man from Dublin with a fine voice and easy style….and The Past Masters – a flexible line-up of some of the more ‘mature’ performers on the folk scene!